The Phoenix Doorway to the Freemasons’ Tower before it fell into ruin
The Egyptian theme appears again in the Orangery made to look like an Egyptian temple with a sphinx over the portico and two figures of gods in black marble flanking the doorway. Incidentally, this organgery was designed by the architect Carl Langhans, who also designed the Brandenburg Gate in Berlin.
So, looking at these features in the New Garden, it’s clear that King Frederick Williamand Prince Carl von Hessen were kindred spirits, both of them at home in this esoteric world of alchemy and Rosicrucianism. Interestingly they were the same age – born in the same year – and they must surely have known each other. They were both members of the Golden and Rosy Cross Order, which clearly played an important role in their lives, so I should say a bit about this order. What was it like to be a member? The Order was grouped into circles of nine members each, and had nine grades of initiation, each involving elaborate initiation rituals. In ascending order, the grades were as follows: Junior, Theoreticus,Practicus, Philosophus, Minor, Major, Adeptus Exemptus, Magister and Magus. This grade structure, slightly modified, was adopted by the English Occult Order, the Golden Dawn, and later by other Rosicrucian orders. 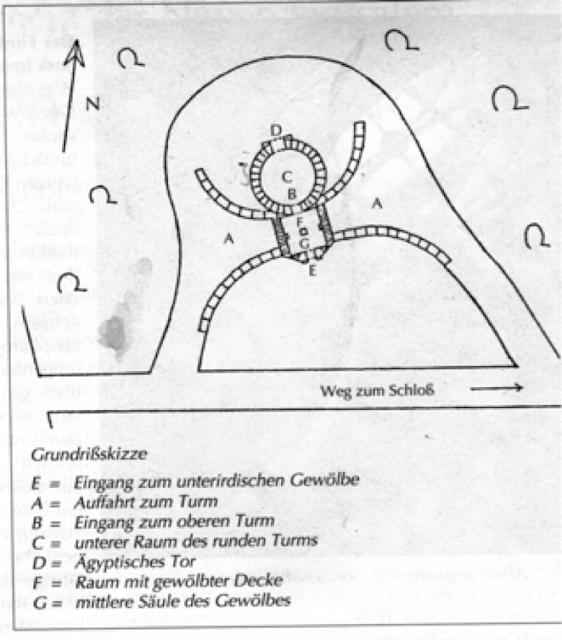 This was a building densely packed with symbolism. First of all take a look at the ground plan (above). It has retaining walls projecting out from it. The Tower is marked C. The main entrance with the Phoenix Gate is marked D. And there were two other entrances on the other side, one of them on a lower level. As one can see, the retaining walls make the shape of an Egyptian scarab, with the Tower forming the ball of dung, pushed by the scarab, and symbolising the sun.
Another interesting thing about the Tower is that the proportions of the building are according to the golden section, a ratio that is present throughout nature – it’s the key ratio with which nature works. It’s present in the proportions of the human body – the limbs, the hands, the face, even in the DNA molecule. And it goes right up to the Milky Way galaxy, which is a spiral, shaped according to the golden section. The ratio is also present in Masonic symbols such as the pentagram, where the sides intersect each other according to the golden ratio.
Looking at the elevation – above ground level there are three three stories, corresponding to the three degrees of Craft Masonry. At the top is a viewing platform. At the very bottom was a cellar and at ground level a lodge room and we think an alchemical laboratory. Here (at the right) we see Prince Carl von Hessen doing alchemy with the famous alchemist, the Count of Saint Germain, who spent the last four and a half years of his life as a guest of Prince Carl, and they worked very closely together.

The Count de St Germain (shown above) was a fascinating and mysterious figure. Apart from being an alchemist, he was a physician, a composer, a painter, a diplomat and much more. Undoubtedly he was not a real count. Some people considered him a confidence trickster, but there is no doubt that he had enormous knowledge and also enormous charm and charisma. Prince Carl came to admire him greatly and worked with him on a number of projects, including developing various remedies and a metal alloy, similar to gold in appearance, which came to be called the Carl metal. So the kind of alchemy they were pursuing was not about turning lead into gold but about refining substances, making elixirs, creating alloys and so on. But it was also about raising the alchemist himself to a higher spiritual level.
Now let me talk a bit about the project to rebuild the Tower. An architect, Axel Brauer, has been appointed and has been working on some alternative designs. The task is not so easy. For various reasons it’s not possible to simply rebuild the Tower in its original form. The foundations are no longer strong enough to hold a heavy structure, so probably the building will have to be held by a skeleton of vertical steel girders, driven into the ground. Then there’s the problem of what material to use for the walls. Wooden panels made to look like stone (as shown below) would not be durable enough, and stone would be prohibitively expensive. 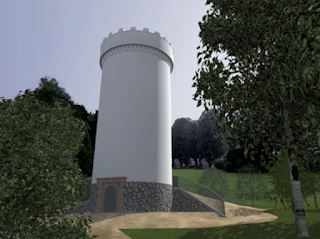 One suggestion the architect made was to use glass, but that didn’t meet with much enthusiasm, so he came up with another idea, which was to clad the building with sheet metal. The building would then look something like the computer simulation shown on the left. This has the merit that the walls could be decorated with murals, such as alchemical images, evoking the alchemical work that was carried out there.
It is intended that the Tower should contain a display about Freemasonry and an alchemical museum, which would also be a working laboratory, so that one could actually demonstrate alchemy as it was practised by Carl von Hessen and his contemporaries. We’re fortunate to have acquired a set of exhibits from an alchemical museum in Kutna Hora in the Czech Republic, founded by my friend Michal Pober, which closed down a few years ago, and he very kindly donated the exhibits to Louislund.
The former Museum of Alchemy at Kutna Hora in the Czech Republic 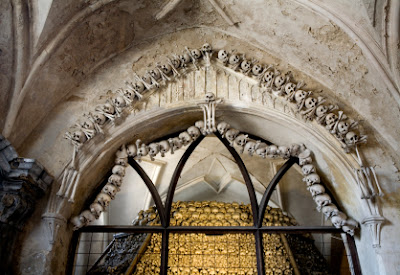 So the reconstructed Tower would be a wonderful resource for Masons, for visitors interested in Freemasonry or the history of science, for pupils in the school, and for the general public. It would mean that the key feature, the cornerstone of the park would be restored,and with it this whole unique park would come to life again and be a place of inspiration and uplifting symbolism – especially of course for Freemasons but also for anyone who is receptive to the spirit of the place. The project will cost an estimated $550,000, and we are appealing for sponsors.
People involved in the project include Princess Ingeborg of Schleswig-Holstein, whose husband Friedrich, Duke of Schleswig-Holstein, is a direct descendant of Prince Carl, who created the park. The Advisory Board comprises, apart from myself, the school Director Dr. Peter Rösner, Dr. Alf Hermann, Head of the Park Archaeology Guild at Louisenlund, Andreas Rothgaenger and Jörgen Jessen from local Masonic lodges, the architect Axel Brauer, Dr. Kirsten Baumann, Director of the Regional Museum of Art and Cultural History, Dr. Margita Meyer from the Regional Ancient Monuments Agency, Gabriele Gruber, Burser of the school, Sven Meier, P.R. Officer, Dr. Eva Witzel, Librarian, and two pupils, Magnus Salsali and Jost-Hinrich Reemtsma, who are members of the school Archaeology Guild, which is working to restore other parts of the park.
There are various privileges that come with sponsorship, depending on the level of the donation. All donors will get regular updates, a guided tour of Louisenlund on request and an invitation to the inauguration of the Tower. For higher-level donations the privileges will include an invitation to a gala dinner with Princess Ingeborg and the school Director, and a certificate of appreciation signed by the Princess, and – for the top donations – also a stay of three days as a guest of  the school with a guided tour of the region. The Louisenlund Foundation is acharity, so donations are tax-deductible.

Further information, including a leaflet about the project, can be obtained from Franziska Trautmann, Project Management, Louisenlund: Tel: +49 4354 999-375
Email: franziska.trautmann@louisenlund.de